You are here: Home / Supplements / Magnesium

Magnesium a.k.a Mg, is an important mineral for the correct nerve signalling in the central nervous system, the delivery of key nutrients to the muscles while assisting in the production of adenosine triphosphate ATP.

Furthermore, magnesium plays a major role in the recovery process post-exercise, while also, acting as a sleep-aid – helping the muscles to relax.

“Magnesium is a cofactor in more than 300 enzyme systems that regulate diverse biochemical reactions in the body, including protein synthesis, muscle and nerve function, blood glucose control, and blood pressure regulation”. (01)

Magnesium is the fourth most abundant mineral in the human body, yet we easily fail to recognize its importance as a sport ergogenic. Those lacking in Mg will often notice their performance levels drop when taking part in exercise.

“Despite Mg’s critical role in energy metabolism, maintaining Mg intake at an adequate level has been frequently overlooked among the general population and athletes”. (02)

The Importance of Magnesium

Magnesium is present in the body as Mg2+ ion, which binds with adenosine triphosphate (ATP) to create the Mg-ATP complex. (03)

While we might often refer to energy output as ATP, it’s actually classed as Mg-ATP. This is due to the way magnesium acts as a stabilizer of all polyphosphate compounds in the body.

Magnesium acts as a stabilizer linked to the creation of DNA – making it an important mineral for the healthy formation of cells within our genetic makeup.

This all sounds fantastic! But don’t we get enough magnesium in our diet?

As discussed in The Use of B-Vitamins For Performance – When the RDA (recommended daily allowance) was first set out, it didn’t include athletes into the equation.

Therefore, if you take part in an activity on a regular basis, the current RDA allowance for magnesium may fall below what your body actually needs.

In this article, I’ll discuss the benefits to supplementing with magnesium, the ideal doses, the side effects, and conclusion.

If you thought magnesium was just a mineral to help relax the muscles, you may be surprised to know it’s much more than that.

Magnesium can give you energy, help you perform better during exercise, and increase the rate at which the mitochondria use the foods we eat as an energy source – making magnesium an all-around sports ergogenic.

Therefore, if your goals are to get stronger, run longer and faster, or swim for extended periods of time – you’re going to need plentiful amounts of magnesium to make your muscles work effectively.

How can all of this be possible?

As previously discussed, magnesium helps the body assimilate the foods we eat to be used as energy.

It also acts as a transporter for many key nutrients associated with energy supply, especially glucose – the main source of energy required for extended performance.

To top it all off, magnesium can also regulate the rhythm of your heart – which is especially important during exercise. 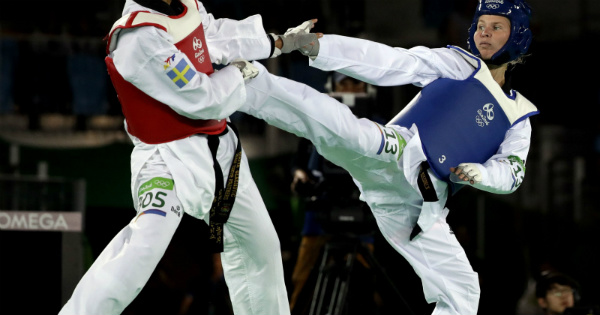 As I have previously mentioned, magnesium CAN improve your performance during exercise but don’t just take my word for it.

A study which took 30 healthy Tae-Kwan-Do athletes aged 18-22 and split them into three groups found that supplementation with magnesium greatly improved their physical endurance.

After only four weeks, when taking part in 20m shuttle runs (used to assess lactate threshold and fitness levels), it showed that Mg supplementation did, in fact, improve performance levels, extending their lactate threshold. (04)

“In aerobic exercise, higher intake of Mg has been shown to be associated with less oxygen needs and better cardiorespiratory indices”. (05)

Glycolysis is another benefit received from magnesium supplementation.

Glycolysis is the breakdown of glucose by enzymes releasing energy throughout the body during intense activity. (06)

Why is glycolysis important?

This is important as it has the ability to regulate how we use glucose as an energy source. In summary, it improves the way the body creates energy during exercise in the mitochondria using carbohydrates.

Have you ever missed a shot when kicking a football? Thrown a ball and missed the target? Or even, failed to sprint to the finish with your full strength and power…whatever sport you take part in?

If your answer is yes like most of us, then you might have already guessed that Mg could have been partly to blame.

There will have been moments when you’ve ‘miss-fired’.  This may have been down to poor nerve signaling. Either created by fatigue or a lack of Mg present in the body.

It’s the role of magnesium to help your nerves fire when required, allowing you to perform at your best. By using a multivitamin which contains Mg, you’ll be able to offset these effects.

Muscle cramps can have a negative effect on anyone’s performance. If you’ve ever been swimming and felt crap set in, or running for the finish line with the sensation of your calve muscles wanting to twist on themselves, then you know what I’m talking about.

Magnesium plays a vital role in the way our muscles remain relaxed yet alert during intense activity.

“Studies have shown that Mg deficiency may lead to the distortion of neuromuscular function (07), suggesting a possible association between Mg and muscle cramps”. (08) 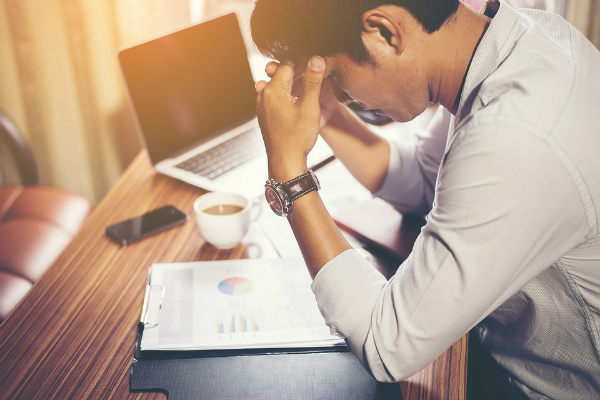 Stress comes in many forms – from exercise and emotional.

This is often caused by environmental changes or an overload in training frequency. Too much stress causes a heap of issues.

Our DNA can alter, our metabolism changes, and the stress hormone cortisol wrecks havoc on our ‘health’ and ‘beneficial’ hormones needed for muscle repair and fat reduction.

It’s been proven that the more stress we experience, either emotional or exercise related, will result in an accelerated loss in nutrients and vitamins.

Hypomagnesemia (a deficiency in Mg) has been associated with increased stress levels. Researchers suggest that supplementing with Mg may help to alleviate stress, acting as a buffer, regulating nerve signaling pathways.

If Mg deficiency continues, this can exuberate the sensitivity to stress further. According to Henrotte, who studied magnesium’s relationship to stress said;

While Mg supplementation can lead to a reduction in physically induced stress, it’s also worth mentioning that magnesium can help to alleviate emotional anxiety.

“Magnesium (Mg) status is associated with subjective anxiety, leading to the proposition that Mg supplementation may attenuate anxiety symptoms”. (10)

If magnesium levels are low, this also means that glutamate, the primary excitatory neurotransmitter in the mammalian brain won’t be able to do its job – which is to balance brain signals responsible for mood regulation. (11) 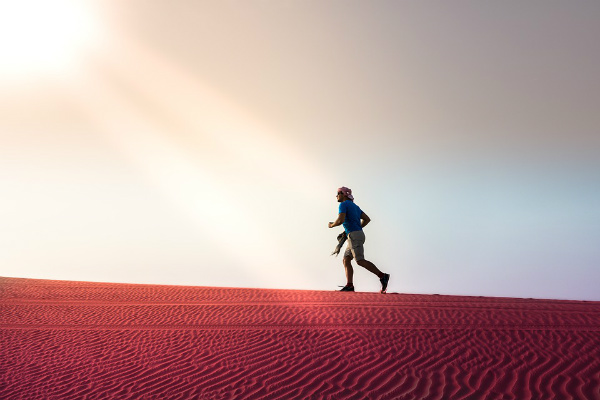 For people who participate in strength training, having low Mg can lead to poor energy metabolism and decreased endurance. (12)

Therefore, those who participate in strength, or endurance events that accelerate metabolic needs will have a much higher requirement for Mg than sedentary individuals.

While the RDA has set out at an average of 350mg per day as a general guideline, we now know this to be an inadequate amount for those taking part in exercise or extra activities which increase water consumption, and perspiration, leading to the accelerated loss of minerals.

“A number of studies evaluated the association between Mg status/supplementation and exercise performance and found that the need for Mg increased as individuals’ physical activity level went up”. (14)

Therefore, athletes should consider using a supplement along with additional food sources which contain magnesium when exercising.

With that in mind, ‘what is the ideal dose of magnesium for an athlete?’ This all depends on the desired outcome.

Without testing the athlete in question it would be hard to determine the ideal dose. However, as a rule-of-thumb, taking upwards of 250mg per day has been effective in reducing muscle cramps, improving nerve signalling, while aiding in recovery without aggravating side effects.

As a whole food multivitamin, using as little as (on average) 20mg per day has also been shown to be beneficial in promoting ergogenic benefits when combined with a varied diet contains plentiful amounts of Mg.

Are There Side Effects When Using Magnesium

Side effects when using magnesium are minor. With some unwanted discomfort being promoted in the bowels, leading to movement in the intestines. This should be avoided during any sport or competition, therefore, avoid mixing large amounts of magnesium with certain food groups.

To avoid these side effects, prevent taking large amounts of magnesium with milk, as the lactose (and magnesium combined) will further stimulate bowel movements.

Also, if you haven’t used magnesium before, stay within the range of 200 – 600mg per day. This way, you’ll be able to access your tolerance and adherence to this health stimulating mineral.

There you have it, a complete breakdown of magnesium. It’s an all-around supplement to help assist the other vitamins and minerals such as Iron and B-vitamins do their job, while at the same time, providing important healing and relaxing benefits for the muscles and central nervous system.

Improved energy support in the mitochondria, the better use of glucose during exercise, and the benefits of stress relief make Mg a sensible choice whether you’re an aspiring athlete or not.

If you’ve ever had twitching legs at night, or any other body part for that matter such as eyes (potentially stress related – see Ashwagandha) the chances of your magnesium levels being low is potentially quite high.

For further information on magnesium and how it can benefit your health and performance please get in touch or feel free to comment below. I’ll answer any and all of your question directly.

(02) Update on the relationship between magnesium and exercise. (source)

(03) Role of magnesium and other divalent cations in ATP-utilizing enzymes. (source)

(04) The effect of magnesium supplementation on lactate levels of sportsmen and sedentary. (source)

(11) The Effects of Magnesium Supplementation on Subjective Anxiety and Stress—A Systematic Review. (source)

(12) Effect of magnesium supplementation on strength training in humans. (source)